Streamline hours of sales tasks and have more quality conversations 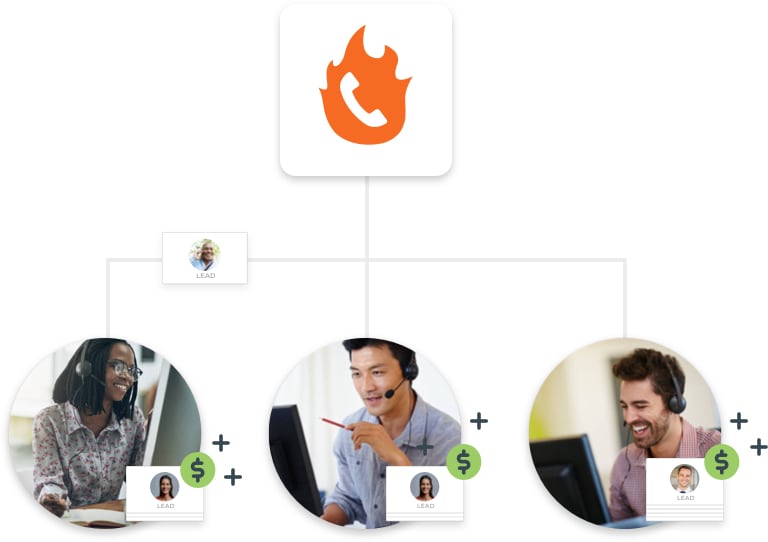 With our Salesforce dialer, your reps can reach up to 80 contacts per hour. Seamless call connections ensures every contact feels like they've been personally dialed by hand. 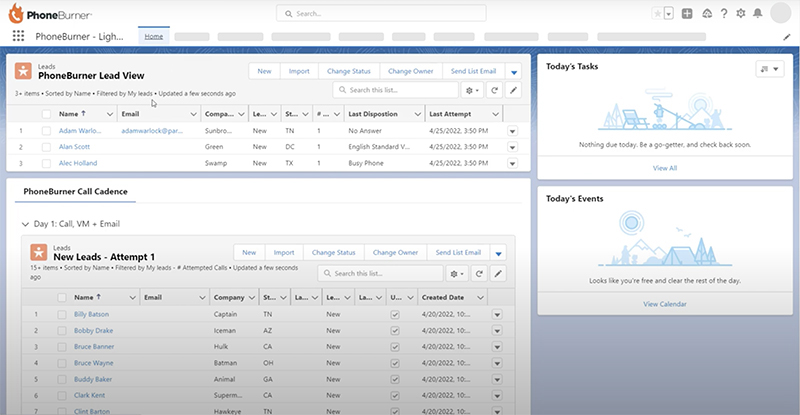 Our customizable homepage gives reps instant access to the contacts, lead lists, cadences and reports they need to see each day, so they can jump right into outreach.

Nurture contacts at the right time, every time. Use our pre-built, multi-step call cadence or create your own custom sequences to ensure reps unlock every ounce of potential in your pipeline.

“Not only is PhoneBurner a great replacement, it's significantly better.” 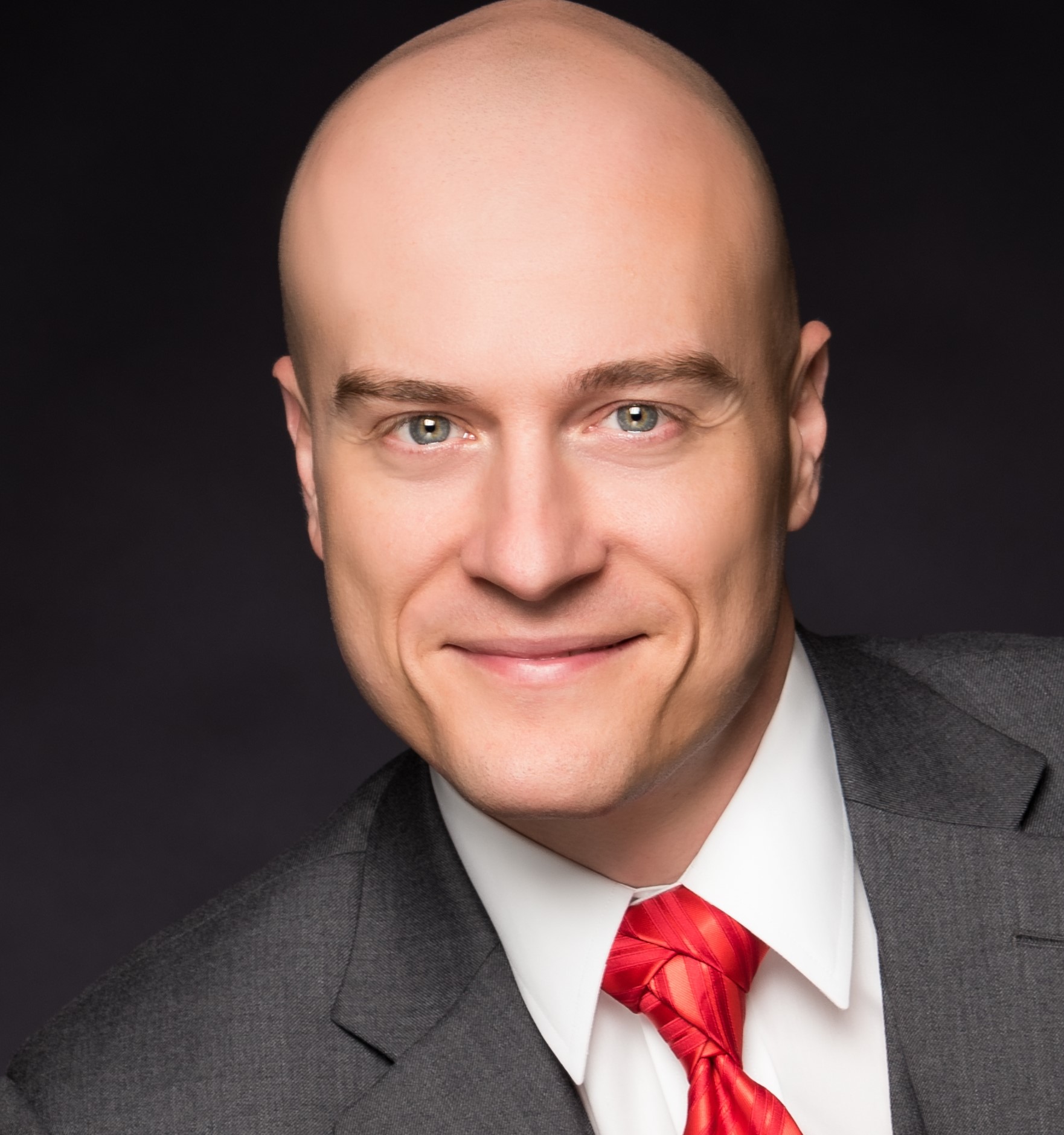 Pay no per-minute fees. Make calls from anywhere, with any phone or a headset.

Leave pre-recorded voicemails in one click. No need to wait for the beep.

Save time by instantly sending personalized emails based on call outcome.

Track call activity and performance across your teams with custom reporting.

The PhoneBurner Salesforce dialer is available on the Salesforce AppExchange, and is compatible with both Classic and Lightning editions. Add the app and start your dial sessions without leaving Salesforce.

The #1 Salesforce dialer for sales reps 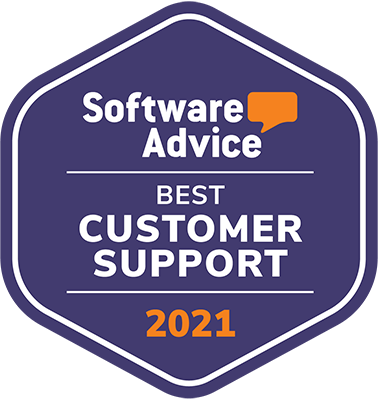 Raves for our Salesforce power dialer 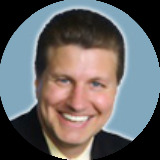 “Amazed at how much more efficient I could be and the time saved using PhoneBurner. It syncs with my Salesforce and updates the activity history reducing the need to go back and manually enter notes. HUGE timesaver! A big shout out to Henry who helped in getting my account set up and Jeff for the one-one training. Great staff!”

“This app truly helps inside sales reps attempt to reach 50+ leads in an hour. Our sales team loves the automated emails and the activities being logged for them. From an admin standpoint the maintenance is simple. Nice to have an app you can actually calculate an ROI.”

With our Salesforce Lightning dialer or Classic dialer integration, PhoneBurner clients average 60 to 80 calls per hour. No awkward pauses or dropped calls means every conversation starts naturally. Use these two PDFs to get your business up and running.

Use this step-by-step guide to sign up for PhoneBurner, install the Salesforce dialer software, and integrate your Salesforce account with PhoneBurner. Need help? Get fast, friendly setup and support from our award-winning team and get up and running quickly.

How to Use Our Salesforce Power Dialer

This guide will teach you how to make the most of PhoneBurner's power dialer for Salesforce. Learn how to begin a PhoneBurner session, configure dial sessions, dial into the phone system, call phone numbers, pre-record voicemails, create personalized emails, take advantage of Local ID, record calls, and more.

How do I set up the Salesforce dialer integration?

To set up the integration you'll need both a Salesforce and PhoneBurner account. Next, find PhoneBurner on the AppExchange and install the app. Salesforce will walk you through some permissions and settings selections to complete the install. Once installed you can immediately start dialing from within Salesforce. Our support team is available if you need to request any additional help.

How do I dial from the Salesforce CRM?

Select contacts from Contacts, Leads, Opportunities, Tasks, Activities, or a custom Object in Salesforce. Then click the PhoneBurner button to launch the dialer. Connect using any phone or through your browser with our softphone.

PhoneBurner is a power dialer software that dials contacts, leaves voicemails with no need to wait for the beep, sends one-click emails based on call outcome, logs calls, and automates post-call workflows. These services and solutions empower users to reach up to 80 contacts per hour, maximizing talk-time rather than task time.

Yes. PhoneBurner syncs with Salesforce calling activity, notes, call outcomes, and other activity, which is then automatically logged in your CRM.

Do contacts hear a delay before I start speaking?

No. Connections with PhoneBurner are 100% free of the dreaded "telemarketer delay." The experience for contacts is the same as if you dialed them by hand.

Is any special equipment needed?

None at all. Make calls from anywhere using any phone. You can also connect with your browser and a headset with our softphone—log into our cloud-based power dialer from anywhere.

Does PhoneBurner have a free trial?

We sure do. No credit card needed. Start your no-obligation free trial today, and watch your outbound productivity soar.

What can I do with PhoneBurner's Salesforce power dialer?

Here's a quick list of what you can accomplish with our Salesforce dialer:

How does a power dialer compare to an auto dialer?

An auto dialer software automatically calls numbers, determines whether it has reached an answering machine or a person, then leaves a message or connects the call to an agent or rep. Auto dialers are often used as a central pillar of a call center software tech stack.

This system has what's infamously known in the industry as the "telemarketer delay." After a prospect picks up the phone, but before they're connected with a recorded message or agent at a call center, there's a short and unavoidable pause as the system connects both parties.

That delay between the time a call recipient answers to the moment they're connected with an agent or recording is highly upsetting to most people. As a result, they'll hang up quickly.

Auto dialers can be effective for quickly disseminating information on a case by case basis, like school closures or political announcements. That's because they can reach a lot of people quickly, and an actual rep is only needed once a call recipient shows interest.

However, since many call recipients hang up quickly after the telemarketer delay, an auto dialer can be detrimental to your sales conversions and hurt your brand's reputation.

Power dialer software provides real-time, live conversations with real humans. There are never any pauses or delays. The rep is on the line the entire time with a power dialer and can begin speaking immediately when someone answers their call.

Aside from dialing pre-selected leads for a rep, the right power dialer software—like PhoneBurner—can also help with time-consuming tasks. For example, reps can drop voicemails and send emails or SMS with one click, log calls, and automate post-call workflows.

How does a power dialer compare to a predictive dialer?

It uses algorithmic-based data to determine the likelihood of a rep being available based on the total number of reps working, calls being made, and other metrics. In this way, it predicts when a new rep will be available and routes calls to those reps the second they're free.

To that end, predictive dialers will sometimes automatically dial a number if there's no live rep available. Even if the predictive dialer's algorithm expects an agent to be available once the call is answered, that doesn't always mean a rep can get on the line in time.

That leads to the dreaded "telemarketer delay." Because a predictive dialer routes the call to an agent only after it determines someone has answered live, call recipients hear an awkward pause as they wait for an agent to come on the line. As a result, predictive dialers tend to increase skepticism and hangups, which can negatively impact results.

Further, since call connections are based on an algorithm analyzing agent availability, there's no ability for reps to take charge in their prospect research and prioritize their list. They have no say in who gets called next, and reps often don't have time to catch their breath between connections.

Last, and most important, predictive dialers can get you into trouble with the FCC, who strictly regulate the use of multi-line dialers like predictive dialers. If an organization drops more than 3% of calls, they may be in violation of the Telemarketing Sales Rule (TSR) and the Telephone Consumer Protection Act (TCPA). The FCC can impose fines for breaches in these protocols up to $43,792 per incident.

Power dialer software provides real-time, live conversations with real humans. There are never any pauses or delays. The rep is on the line the entire time with a power dialer and can begin speaking immediately when someone answers their call.

Aside from dialing pre-selected leads for a rep, the right power dialer software—like PhoneBurner—can also help with repetitive tasks. For example, reps can drop voicemails and send emails or SMS with one click, log calls, and automate post-call workflows, making it ideal for saving time.

A power dialer is more effective because the rep is in control the entire time and can tailor messages to each specific prospect based on research, notes from previous calls, or additional context in the dial window. That means well planned and personalized pitches, stronger interactions, and higher quality calls that get results.

Get started with a free trial. No credit card needed.